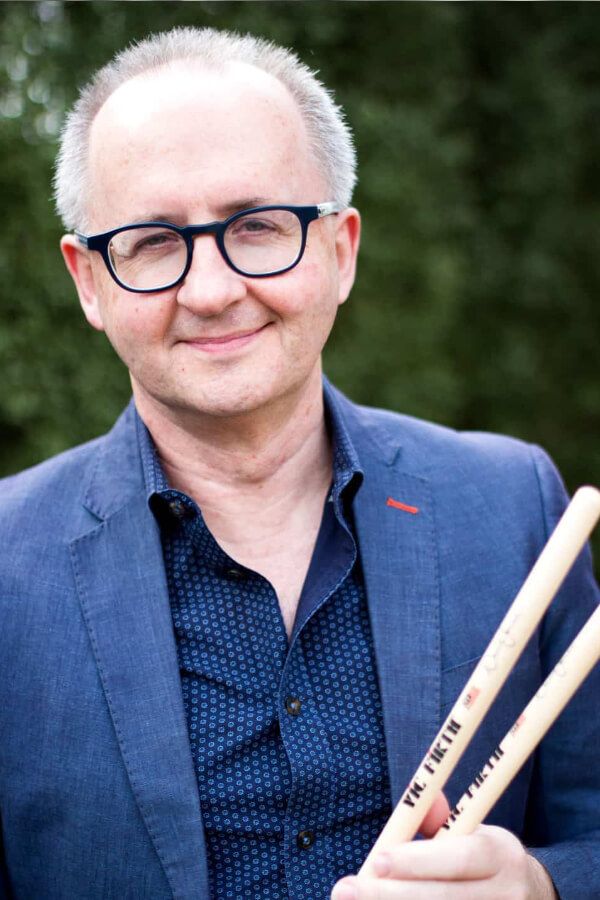 Master Drummer David Jones is often described as one of the most innovative and musical drummers in the world.

David’s brilliant career of over 40 years, spans all types of music, playing with some of the greatest musicians in every style. From John Farnham to James Morrison, Dragon to Dame Kiri Te Kanawa, Don McLean to John Denver, Kate Miller-Heidke to Tommy Emmanuel, from WDR Big Band to John Williams, Crossfire and the legendary Pyramid.

He is a frequent guest artist and soloist with major Orchestras. He’s first call drummer for the Melbourne Symphony Orchestra, Hong Kong Philharmonic and Orchestra Ensemble Kanazawa in Japan.

He’s had not one, but two Drumkit concertos written specially for him, by Tokyo composer Toshi Watanabe (2006) and Melbourne composer Joe Chindamo (2018). The 2nd Drumkit Concerto was commissioned by MSO, and premiered in March 2018, conducted by Sir Andrew Davis, as part of The Last Night of the Proms. (Recently again performed at the iconic Myer music bowl with Melbourne Symphony and Benjamin Bayl conducting.)

Both concertos propelled the drumkit into new territory.

As a result of David’s awesome performances of these pieces, the drumkit is now taken seriously as a solo instrument in the classical world.

David is an Honorary Fellow and guest lecturer at Victorian College of the Arts in Melbourne since 2013.
In 2015 he was appointed lecturer at the James Morrison Academy.

He was Head of the Jazz Drum department at the Sydney Conservatorium between 1985 and 1992, and continues to teach private students and run workshops around the country,internationally and online. He has a very active presence on social media.

David featured on many international drumming festivals in Europe and Los Angeles throughout the mid to late 90s and in the Southern Hemisphere for over 30 years.

David is passionate about the drums and has created 5 different solo shows, and delighted general public audiences since 2005 with the musical and rhythmic excitement of drums and percussion.

Since 1984, David has uniquely integrated his meditation practice into his music-making. With his partner Carmen Warrington, he has created many guided meditation CDs for ABC Music.

In 2010, David received the prestigious Melbourne Prize for Music Award. This was a significant milestone for David as a drummer and improvising musician. It’s the first time in Australia that a major music prize has been awarded to a drummer. The Award pays tribute to David’s lifelong contribution to the music community and recognition of his unique individual voice and musical signature.