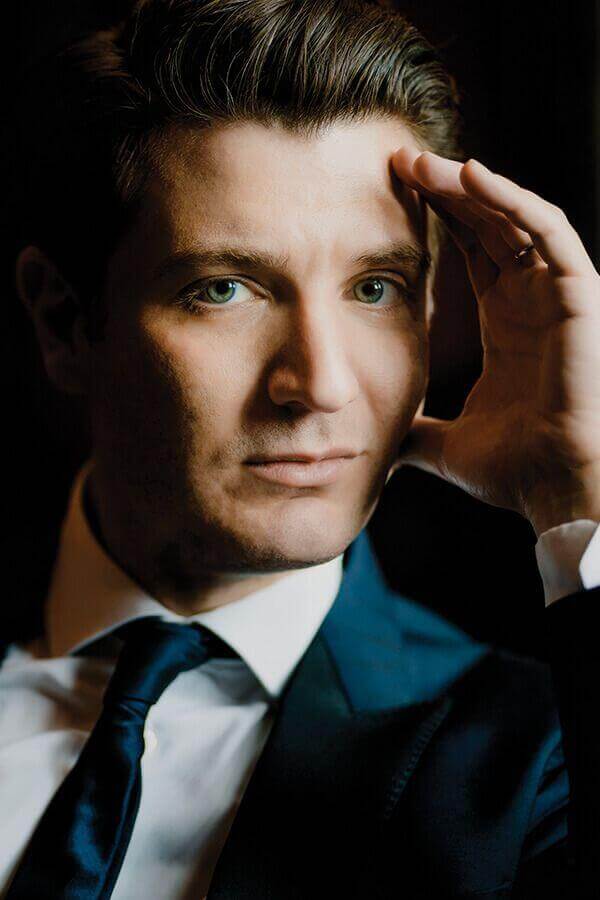 Combining exceptional lyricism and insight with consummate technique, Alessio Bax is without a doubt “among the most remarkable young pianists now before the public” (Gramophone). He catapulted to prominence with First Prize wins at both the Leeds and Hamamatsu International Piano Competitions, and is now a familiar face on four continents, not only as a recitalist and chamber musician, but as a concerto soloist who has appeared with more than 100 orchestras, including the London and Royal Philharmonic Orchestras, Dallas and Cincinnati Symphonies, NHK Symphony in Japan, St. Petersburg Philharmonic with Yuri Temirkanov, and the City of Birmingham Symphony with Sir Simon Rattle.

After inaugurating a new three-year appointment as Artistic Director of Tuscany’s Incontri in Terra di Siena festival in summer 2017, Bax launches Chamber Music Society of Lincoln Center’s 2017-18 season in company with his wife and fellow pianist, Lucille Chung. Further highlights of his full season include a pair of high-profile U.S. duo recital tours with violinist Joshua Bell and flutist Emmanuel Pahud, respectively; UK solo recitals at London’s Wigmore Hall and the Leeds Piano Festival; collaborations with U.S. orchestras from the Minnesota Orchestra to the North Carolina Philharmonic, on concertos by Gershwin, Grieg, Rachmaninov, Saint-Saëns, and Schumann; return engagements in Yerevan with the Armenian Philharmonic and in Hong Kong; and Signum Classics’ release of his recording of Beethoven’s “Emperor” concerto with the Southbank Sinfonia, paired with rarely heard solo works by the master composer.

Last season, Bax returned to the Vancouver Symphony for MacDowell’s Second Piano Concerto with Bramwell Tovey, and stepped in at the eleventh hour to play Brahms’s Second Piano Concerto with the Cincinnati Symphony under Sir Andrew Davis, in what proved “the most exciting debut in recent memory” (Cincinnati Enquirer). He also gave three performances at the Wigmore Hall, including his solo recital debut, which aired live on BBC Radio 3, and a duo recital with his regular collaborator, Berlin Philharmonic concertmaster Dashin Kashimoto, by way of a coda to their extensive Asian tour. Other highlights of recent seasons include Mozart with the Los Angeles Chamber Orchestra under Hans Graf; Rachmaninov with London’s Southbank Sinfonia led by Vladimir Ashkenazy; his Minnesota Orchestra debut under Andrew Litton; a return to the Dallas Symphony for Barber under Jaap van Zweden; season-opening appearances with the Colorado Symphony; and concerts at L.A.’s Disney Hall, Washington’s Kennedy Center, and New York’s Carnegie Hall. In 2009, the pianist was awarded an Avery Fisher Career Grant, and four years later he received both the Andrew Wolf Chamber Music Award and Lincoln Center’s Martin E. Segal Award, which recognizes young artists of exceptional accomplishment.

At age 14, Bax graduated with top honors from the conservatory of Bari, his hometown in Italy, and after further studies in Europe, he moved to the United States in 1994. A Steinway artist, he lives in New York City with pianist Lucille Chung and their daughter, Mila.