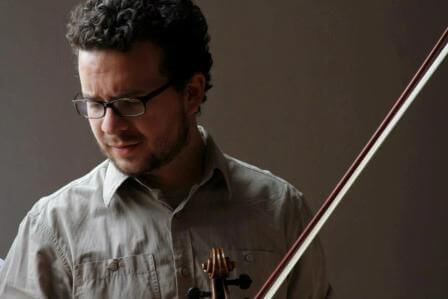 Ecuadorean violist Simón Gangotena began his studies at the Conservatorio Franz Liszt de Quito in 1998. In 2004 he joined the Orquesta Juvenil del Ecuador as principal violist. During 2005 he was selected to represent Ecuador in the Orquesta de la Juventud Latinoamericana CAF, conducted by Gustavo Dudamel. In the same year he came second in two national competitions: Concurso Nacional Jovenes Talentos and Concurso Nacional del Centro Cultural Ecuatoriano-Aleman. He joined the Youth Orchestra of the Americas (YOA) for their international tours in 2009 (North America) and 2010 (South America). In addition he appeared in the YOA’s debut in the acclaimed Carnegie Hall of New York in 2010 and Koncert Haus of Berlin in 2011. He collaborated, together with the YOA String Quartet, with the Washington Ballet for their 2011 season. During the same year he obtained his Bachelor of Music from the Chicago College of Performing Arts under the instruction of accomplished British violist Roger Chase.

Simón Gangotena was invited by the Embassy of Ecuador in China and Korea to perform recitals in Beijing and Seoul as part of Ecuador’s National Day in August, 2013. He has appeared with the Sinfónica Nacional del Ecuador as a guest artist on numerous occasions and was the founder of the chamber ensemble InConcerto in Quito-Ecuador. He has received master classes from teachers such as Robert Chen, Lawrence Newman, and Richard Young and has performed under the baton of conductors such as Valery Gergiev, Gustavo Dudamel, Carlos Miguel Prieto, and Benjamin Zander. Additionally, he regularly collaborates with the Sinfónica Naciona.