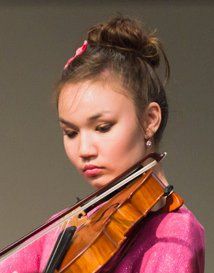 19-year-old Emi Mizobuchi is a second year bachelor’s student in Viola Performance, studying with Professor Kirsten Docter at the Cleveland Institute of Music. Emi has played in numerous orchestras and chamber groups at the Cleveland Institute of Music, working with members of the Cavani Quartet and Peter Salaff. In 2013, Emi graduated from the high school program of the University of North Carolina School of the Arts, where she studied Viola Performance with Professor Sheila Browne, and performed extensively in their chamber ensembles and symphony orchestra. Prior to her time at UNCSA, Emi was principal violist of the Mallarme Youth Chamber Orchestra in Chapel Hill, NC; an active participant in their chamber music program, she worked closely with the Ciompi Quartet at Duke University. Emi is also an avid proponent of new music and has performed and worked alongside budding and established composers in the Triangle area of North Carolina.